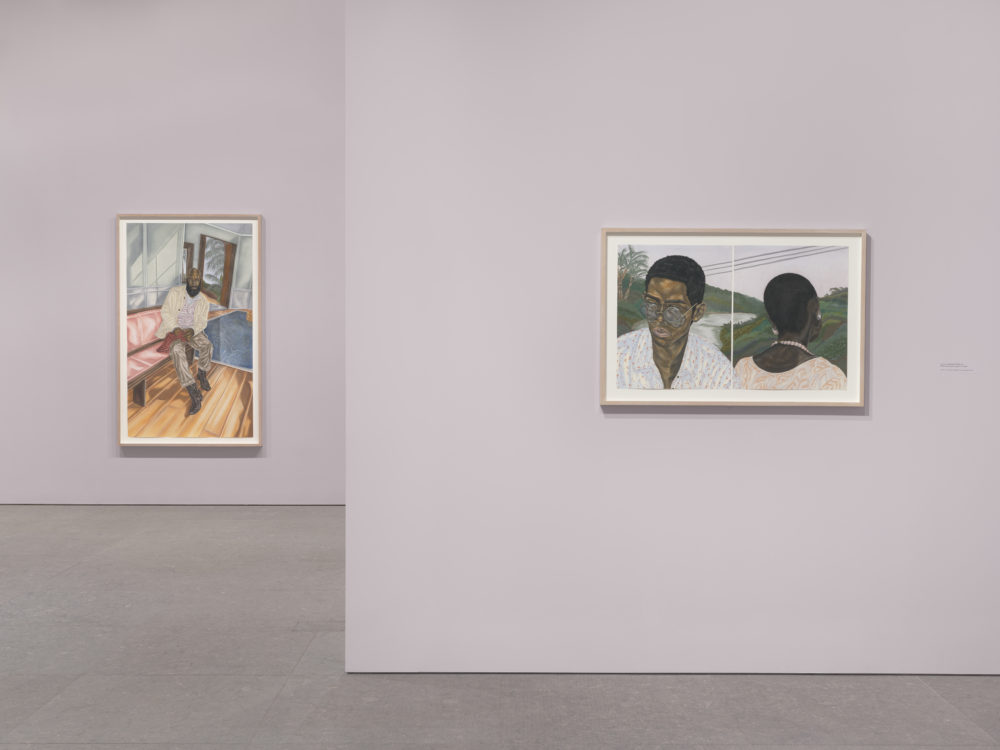 When visitors step into the Whitney’s first-floor gallery, which currently houses Toyin Ojih Odutola: To Wander Determined, they risk forgetting that they are standing in a museum. There is a softness to the space that distances it from the rest of the building, its warm lighting and the pink color of the walls evoking a feeling of intimacy that is both inviting and disorienting. A proclamation near the entrance, signed by artist Toyin Ojih Odutola in her role as “Deputy Private Secretary,” alerts viewers that the sixteen arresting works spread throughout the gallery are from the private collections of two aristocratic Nigerian families, the UmuEze Amara and Obafemi, connected through the marriage of the Marquess of UmuEze Amara, TMH Jideofor Emeka, and his husband, Lord Temitope Omodele. With this information, the intimate atmosphere is given context: it feels as if visitors have been transported to a private, family portrait gallery.

If not for the aforementioned, rather official wall text bearing the families’ crests, viewers would not know that Ojih Odutola’s subjects were of such prestigious social standing. Even armed with this knowledge, they are confronted with an incomplete narrative, left to question the identities of the elaborately fashioned figures in each portrait. No names are provided, nor are there any indications of the lineage from which each subject descends. What remains in their absence is a vague understanding that the subjects are related, as well as a desire to know how. Perhaps in other circumstances it would not occur to visitors to scrutinize the figures presented to them, but the context both provided and omitted by the artist’s proclamation incites a curiosity that may never fully be satisfied. This is the challenge that Ojih Odutola sets forth for her audience.

by Tina Orlandini Thanks to Performa 11, the only biennial dedicated to exhibiting contemporary works of performance art, November in New York City is filled… Continue Reading Experience Performa 11: Live Performances and Classes

ASIAN CONTEMPORARY ART WEEK is coming up in New York!  The title of the program is a bit of a misnomer, as the event spans… Continue Reading On the Horizon: Asian Contemporary Art Week