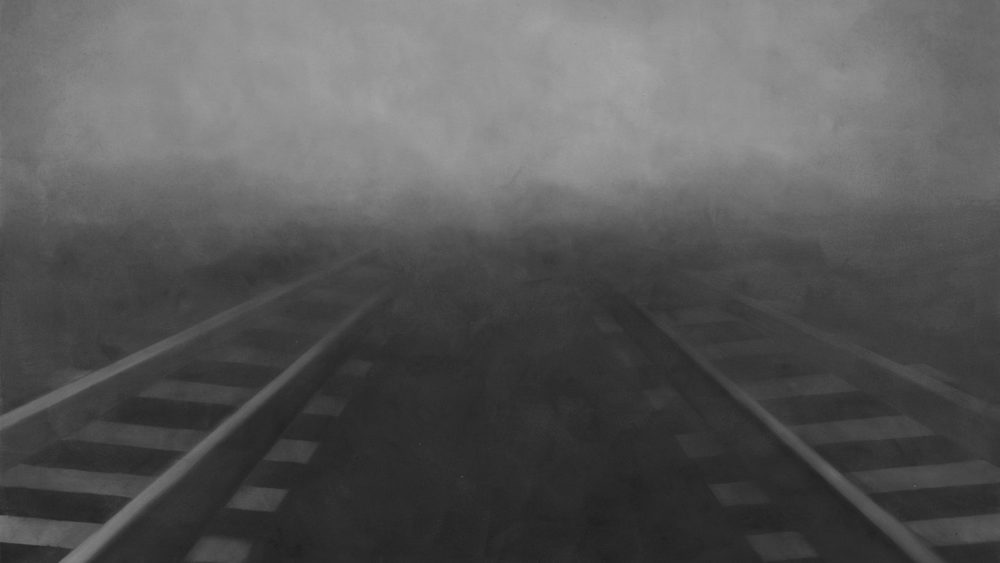 “The horror of looking is not necessarily in the image but in the story we provide to fill in what is left out of the image.” -Marianne Hirsch [1]

A recent survey conducted in February 2018 by the Conference on Jewish Material Claims Against Germany found that 49% of Millennials cannot name a single concentration camp or ghetto among the dozens that operated during the Holocaust.[2] Just one month after the survey’s results became public, an exhibition of California-based artist Natalie Arnoldi titled This Happened Here opened at Charlotte Jackson Fine Art. Five large-scale paintings by Arnoldi, which were not for sale, went on view from March 9th – 31st at the gallery in the trendy Railyard District of Santa Fe, New Mexico. These five paintings offer one avenue through which contemporary art can minimize the distance between a contemporary public and a historical event like the Holocaust.

An obscure, grainy oil painting of railroad tracks descending into the bleak distance rendered in greys, whites, and blacks titled Helix (2012) functioned as the meaningful starting point of the exhibition. A few years ago, a woman visited the studio of artist Charles Arnoldi, Arnoldi’s father, where one of his daughter’s train track paintings was hanging. Upon viewing Arnoldi’s painting, the woman burst into tears. She explained that her grandmother was a survivor of Auschwitz-Birkenau and that the work had reminded her of her grandmother’s arrival to the camp. Her reaction is a potent reminder that art does not exist in a vacuum. It is also a profoundly interesting example of the power of post-memory.