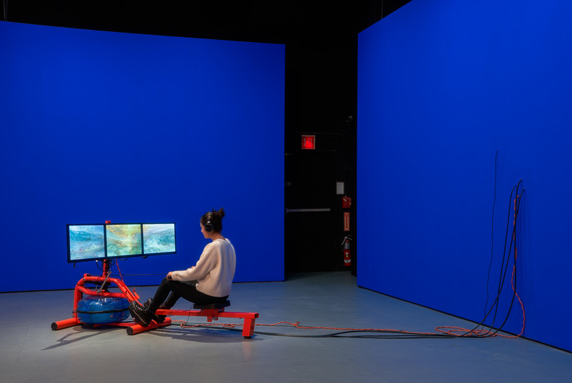 Resident Evil, Sondra Perry’s first solo institutional exhibition, fills the second-floor gallery of The Kitchen with a handful of video works made in the past year. Each is “immersive” in one way or another, deploying tactics of spatial activation and coercive, embodied viewing to force visitors into visceral engagement with the screens and their troubling content. These strategies of discord and discomfort mirror the works themselves, which center themes of police brutality and other racialized violence, examining how images and narratives of these issues circulate, distort, and abstract in the digital realm.

The first work one encounters in the exhibition is netherrrrrrrrrrrrrrrrrrrrrrrrrrrrrrrrrrrrrrrrrrrrrrrr 1.0.3 (2016), set into its own tiny black box. In the video, Perry draws a provocative parallel between the “blue screen of death”—the infamous error screen in Windows operating systems—and the “blue wall of silence,” an unwritten oath among police officers not to incriminate one another in cases of excessive force, brutality, or even murder. At one point in the video, footage of Bill Gates and other Microsoft executives dancing on a convention stage is dubbed over with a deadpan, computerized description of the unwritten officer’s code of conduct (perhaps a double entendre with the computer code that later scrolls by). Another passage features images of women killed by police set to the same voice describing the blue error screens in banal terms. Though intentionally ambiguous, the video uses montage to suggest that capitalist systems and their technological agents are intimately connected with, if not responsible for, the violence wrought against black bodies in neoliberal America.