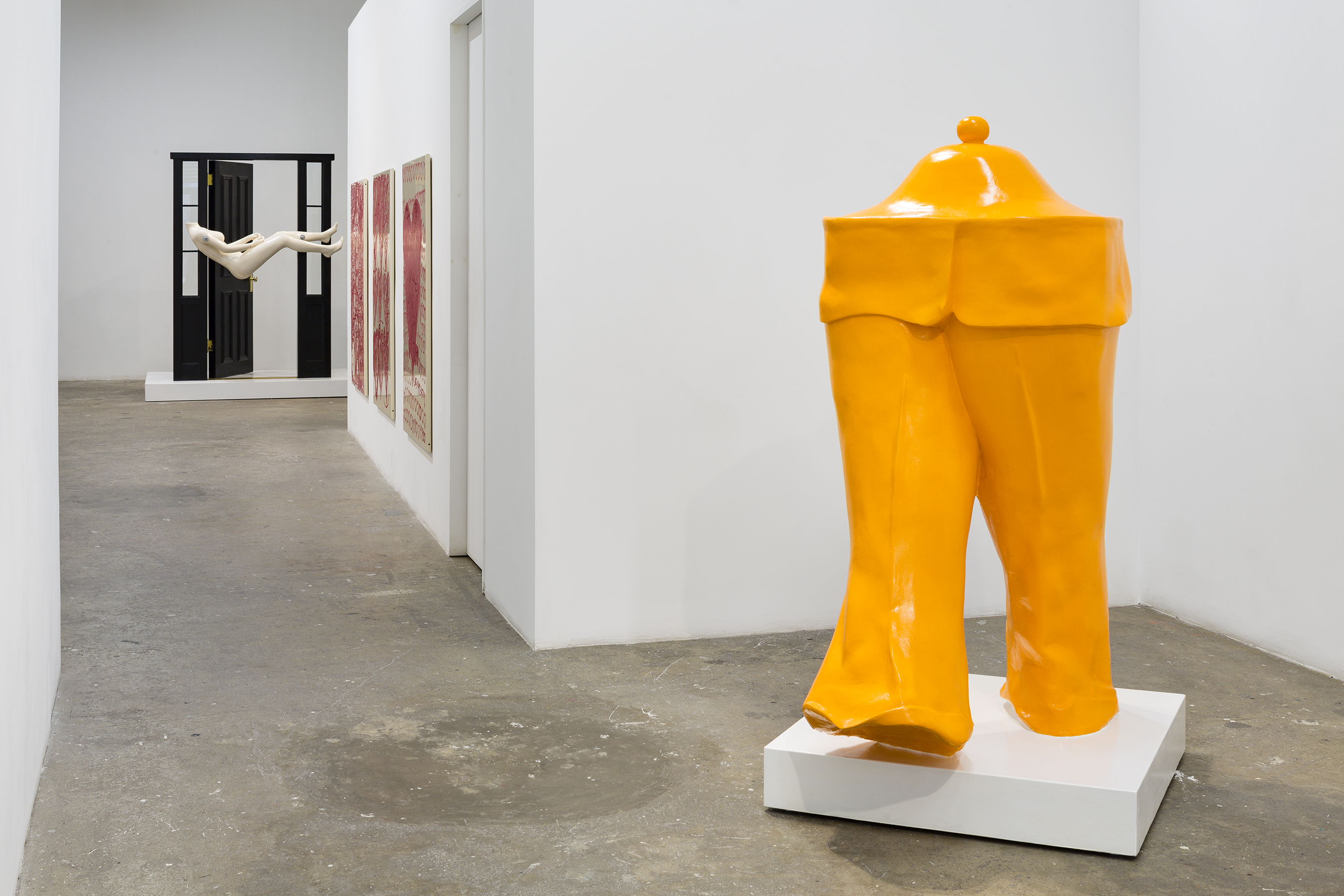 Jennifer Rubell’s Housewife, an installation at the Sargent’s Daughters gallery on the Lower East Side, attempts a conceptual history of modern femininity. In the simplest terms, the show is a meditation on the seeming universality of white, middle-class femininity. However, to critique Rubell’s stark visual vocabulary in this way fails to acknowledge that her work nevertheless touches a certain comprehensive psychological experience, which is both explicit and all-inclusive. From the 1950s housewife to contemporary dating and the difficulties of being a modern woman in the workforce, Rubell’s four pieces ­­– Pedestal, Vessel, Partition Paintings, and Threshold ­– visualize the precarious nature of a femininity defined and circumscribed by others.

Three steps into the gallery space and the viewer is confronted by Pedestal, an industrial-quality vacuum cleaner placed next to a polished pair of red patent-leather heels fitted atop a heavy square platform. The glaring absence of the female form (the immediate assumption being that the empty space is, in fact, female), registers instantaneously. The effect is an invitation for the viewer to come closer, to slip on the heels, to grip the vacuum and fill that empty space. Although no apron or string of pearls is provided, the associations Rubell creates resonate with clarity. The piece references the commodified feminine ideal of the 1950s housewife who vacuums in her heels, has a hot meal on the table by six pm, and is ready for romance every night. However, because Rubell empties out that visual space, the viewer subconsciously fills it with her own form, which in return highlights the falsity and psychological dangers inherent in such mediating feminine perfection.

Vessel. What initially appears as two trunk-like orange pillars, the viewer recognizes as a pair of pants. More specifically, the creases and drop-waist hemline denote the pantsuit of a typical working woman. Lacking a torso, Rubell removes any indication of the female form and instead fills the hollow cavity inside the sculpture with cookies. Yes, these cookies can be munched on while wandering around the gallery. However, Rubell problematizes the cookies by using Hillary Clinton’s oatmeal chocolate chip cookie recipe. Hilary released this recipe to Family Circle Magazine in 1992 after receiving criticism for comments perceived as disparaging stay-at-home mothers. Interestingly, Hillary’s action started a tradition among First Ladies. Laura Bush, Michelle Obama and Melania Trump all published family cookie recipes while on the campaign trail.

Regardless, Rubell’s Vessel reveals an inner working-girl psychology; the brittle, inflexible outer shell versus the soft, gooey cookie inside; the bold step off the platform versus the concave interior. Beyond the pantsuit and Clinton’s cookies, the piece imagines ‘woman’ as breadwinner. Her efforts put food on the table or, in this case, cookies in the jar; however, anyone who happens to meander past the work can reach inside and take a cookie. The piece speaks to the fight women led to redefine that ‘perfected housewife’ ideal present in Pedestal in order to instead be able to define themselves. However, the piece’s concavity reveals how women continue to be thought of as only a vessel for someone else’s thoughts, ideas, desires, and appetites. This issue of self-definition is central to Rubell’s visual line of reasoning which ponders the question of just how liberated a woman could be if all her empowerment and self-actualization has brought her to setting aside one set of cultural norms only to be asked to take up another.

Partition Paintings. Here ‘partition’ translates to bathroom stall. Each of the four paintings trade canvas for an industrial-grade bathroom stall door and a traditional paintbrush for a stick of cherry-red oil paint. Red hearts and lip prints are scribbled with a manic energy over each surface. Yet the exact design differs painting to painting, and in all the untidy script is less like a child’s doodle and more like a phone number hastily written on a napkin in lipstick and slipped into someone’s pocket. Rubell did, in fact, include a phone number in the paintings: her own, which intentionally makes the paintings introspective. Up to this point, the viewer had been engaging with a collective psychology. However, Rubell’s phone number flips the perspective to her own lived experience. She says, “this show is about exploring places I could never bear to go: longing for someone to call me up for a date, getting married, [and] vacuuming in high heels for my husband’s pleasure.”

Again, the work is subconsciously hollow. Rubell’s seeming inability to conform her life to what she imagines love and femininity to be is written into each phone number and heart. Indeed, some of the hearts are left empty and devoid of color. For others, Rubell goes to the trouble of filling them in herself.

Threshold. The most arresting moment of Rubell’s conceptual history occurs at the back of the gallery. A lacquered blue doorway acts as the backdrop to a familiar scene. A happy couple, just married, enters through the doorway of their first home. As per tradition, the groom lifts his bride into his arms and carries her across the threshold – at least that is what we would see if this were a conventional scene. It is not. Instead, the viewer approaches the piece head-on, which visually aligns her with the groom’s role. The bride, however, is fragmentary; her naked, headless form suspends in the air which is affixed to the door by two menacing-looking screws drilled through her shoulders and ankles. The effect is translucent. She is stuck; both to the door and to her groom. She cannot fit through the door. To do so she must lose either her head, her feet, or both. The image created speaks to a woman wedged between two ideals. To fit through the door, to cross the threshold and fulfill her traditional role, she must first reject her most valuable resources. To remain outside is to remain trapped and at odds with a groom attempting to take her somewhere she is not capable of going.

Jennifer Rubell’s Housewife is a complicated work of visual intensity that requires active viewership. The intentionality of her work is, nevertheless, clear. By emptying out sculptural spaces within Pedestal, Vessel, Partition and Threshold, Rubell invites viewers to position their own culturally-specific views within the context of the work which, while creating a striking visual effect, also provides an active space of contemplation. This requires trust, and a willingness to let go of any automatic, knee-jerk interpretations that, instead of challenging the viewer, only make opinions more comfortable.  An awareness of the compelling minimalism of  Rubell’s strict, white, middle-class vocabulary leads the viewer to instead identify such visual limitations with a greater access to discrete moments of universal feminine insecurities. A walk through Rubell’s Housewife proves it. These moments are often painfully self-conscious and acutely anxious formative psychologies of femininity. Yet, Rubell’s installation argues with conviction that women today, in all their liberated and empowered glory, are still being undermined by cultural norms as old as their grandmothers. In this way, she is contributing to a conversation that, at least politically, has perhaps never been as pertinent as it is today. All she asks is that you don’t forget to take a cookie on the way out.

Published in Featured and Reviews