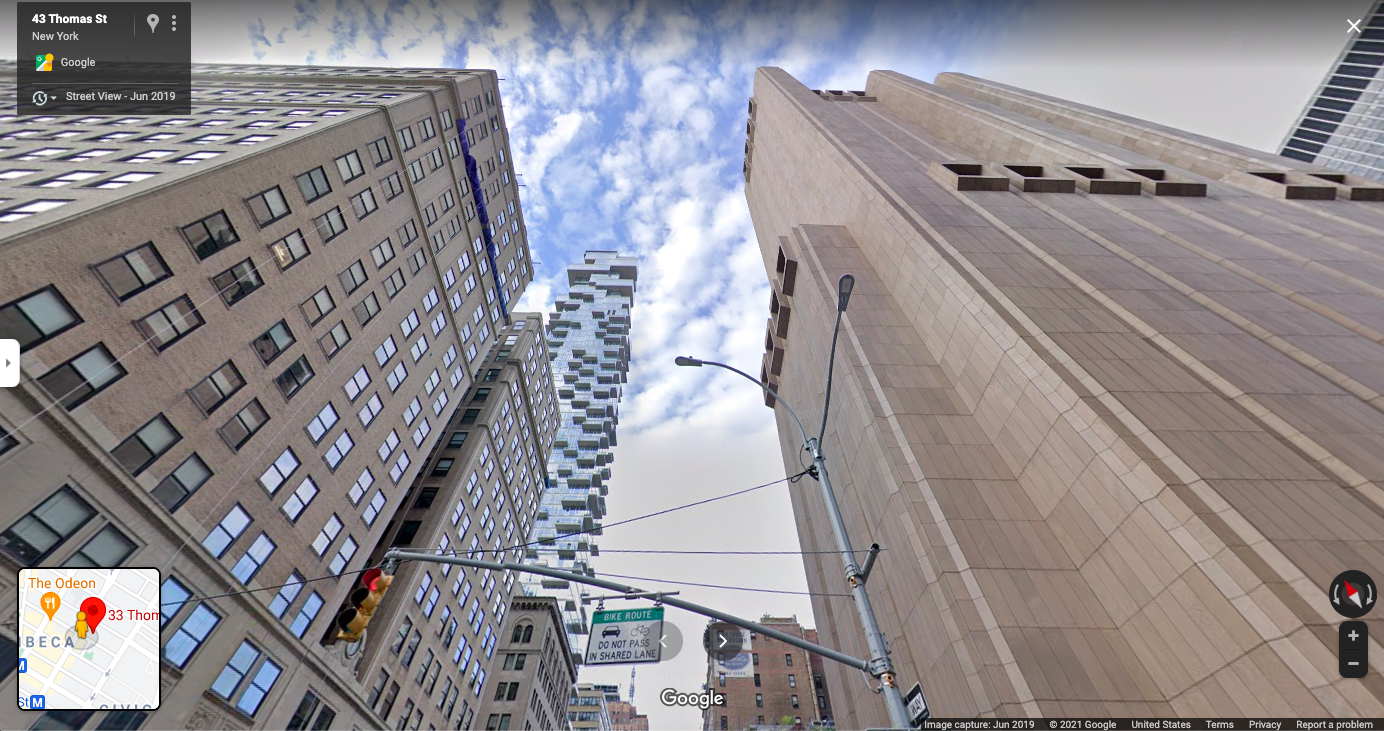 Cover image: 33 Thomas from the intersection of Church and Worth. Image courtesy of Google Maps.

A few blocks south of Canal Street in Tribeca, located at the intersection of Church and Thomas, stands one of the most unusual skyscrapers in Manhattan. At 550 feet in the air, 33 Thomas—commonly referred to as the “long lines” building—has 29 floors, 3 basements, no windows, and no exterior illumination. In contrast to the hyper-visibility of 56 Leonard, the “jenga building” designed by Herzog & de Meuron right up the street, 33 Thomas seems not to demand attention. It doesn’t grab the eye; its bleak surface seems to withdraw from visibility, becoming an anonymous structure within the illuminated cityscape. Yet, the formal austerity of its design and its obvious lack of windows makes the building an intriguing and enigmatic object nonetheless. As New York Times architectural critic Paul Goldberg has written, “You see it and you don’t see it at the same time.”

Built in 1975 for New York Telephone (now a subsidiary of AT&T) as part of a series of telecommunications structures constructed across the city between 1960 to 1980, the building was and is a major node in the city’s and the country’s information grid. It’s one of the largest processing centers of phone calls, faxes, and (more recently) internet data in the United States. At the time of its construction, 33 Thomas was uniquely celebrated for its ability to integrate ambitious architectural design with the functional requirements of a major telecommunications hub—the need for long corridors to house computers, cables, switchboards, and electrical wiring. Breaking from the box-like mold of other telecommunications buildings, 33 Thomas was considered at once sensitive to its surroundings but also sufficient as an autonomous architectural feat. Since its initial construction, the building has been the subject of endless speculation about its function and peculiar design, becoming the source of popular myth.

More recently, evidence from documents leaked by Edward Snowden in 2013 has identified 33 Thomas as one of the most important National Security Agency surveillance sites, code-named TITANPOINTE. According to information in the leaked documents and the work of investigative journalists, the facility is currently used by the NSA to tap into phone calls, faxes, emails, and other internet data that pass through AT&T’s network. Under the secret surveillance programs BLARNEY and FAIRVIEW, the NSA establishes “partnerships” with commercial service providers in order to access phone and internet traffic—foreign and domestic—as it passes through the partner’s network. 33 Thomas contains NSA equipment housed in a secure room inside the building, which is used to monitor this traffic, filter it, and forward the data to NSA headquarters at Fort Meade in Maryland. In addition, the 33 Thomas site intercepts satellite communications, internet data passed between satellites.

Since 2013, the building has become the subject and the site of artistic works by several artists. In 2015 Trevor Paglen photographed the building as part of an installation at Metro Pictures. The photograph’s view from the street underscores the building’s aura of impenetrability, heightening the difference between one’s perception of the exterior and the completely sealed interior—like a fortress hiding in plain sight. In fact the building’s designer, the prominent architect John Carl Warnecke, conceived of 33 Thomas as a “20th century fortress,” built to withstand the onslaught of signals of information and the possibility of atomic attack. In the case of nuclear fallout, the building is equipped with reserve power capabilities that permit it to seal itself off from the outside world and continue to receive, store and pass on data like a “self-contained city.” Viewed in this light, as in Paglen’s photograph, the building takes on a distinctly dystopian appearance. Its severe lines and geometrical accents suggest domination, impregnability, and secrecy, acting as a kind of brutalist Tower of Babel in which the world’s communications are collected, but to which we are not permitted access.

One searches 33 Thomas’s austere surface for points of vulnerability and comes to fixate on the massive rectangular exhaust vents that encircle the structure. Used to expel air and exhaust from the building, these vents become charged sites on the building’s surface, breaking up the monotony of the exterior. Set against the long, unbroken walls of the building, the vents suggest porousness. It’s naturally where the eye is drawn, as if one is attempting to peer into the building, imaginatively transforming the vents into the structure’s missing windows. These sites of expulsion for the building are paradoxically perceived as openings for the viewer. However, they are only partial openings. The vents pull the viewer in like the streams of information that flow into the building, but they afford no knowledge of the structure or its purpose, setting up an enigmatic dynamic in which one is pulled in by the structure (there is something to see here), but at the same time pushed out by it (there is nothing to see here). This is analogous in some way to the relationship between the building and its surroundings. It extends outward to complement neighboring structures, blending into its environment—which is why it was initially praised—but it also recedes into itself, becoming self-sustaining and autonomous in relation to its site, as in the extreme case of nuclear attack.

Paglen’s picture of 33 Thomas as well as his larger photographic oeuvre exposes a similar dynamic. His images of surveillance facilities bring these often invisible places into focus, isolating them; but at the same time they reveal how embedded these facilities are in their surroundings. Paglen’s photograph of 33 Thomas, for instance, incorporates not only the luxury building at 56 Leonard under construction, but also New York’s FBI field office, located a block away from 33 Thomas, which was used as a contact point for NSA employees working at the TITANPOINTE site.

Likewise, Paglen’s photograph of NSA headquarters in Fort Meade taken from a helicopter plays with the idea of visual supremacy afforded by the aerial perspective. In this case, we are confronted with a division between vision and knowledge; we are presented a total vision of the site, yet we do not have access to its operations, most of which are classified and secret, barred from the visibility of the citizen. Paglen’s photograph makes us question what we are seeing, what it means to see what we are seeing, and also what we are not seeing while we look at the image. Every image brings something into visibility and at the same time conceals it or an aspect of it.

In 2016 the filmmaker Laura Poitras projected images of classified NSA documents and codenames onto 33 Thomas, transforming the building’s exterior into an illuminated display. Poitras’s projections had not only the effect of making visible classified information about domestic surveillance; her actions also designated the site as a surveillance hub, making visible a site whose purpose is to remain invisible. The artist’s projections not only exhibit an image, they performatively enact an initial claim on the visibility of the site: there is something to see here, and it’s your right to know about it.

Because many of these sites are not known to be surveillance hubs and are actively concealed by the government, the very act of making them visible to the public is political—a kind of political theater that renews problems of knowledge and representation. For art to come to terms with the vast, invisible surveillance infrastructure that is developing around us, one must learn, like Paglen and Poitras, how to see what is not there.

Published in Columns, Photography and Uncategorized